Stop Pretending Price Inflation Is a Result of “Too Much” Profit

Ivermectin “Works Throughout All Phases of Illness” – The Expose

by Flambeaux
in Blog, Health, National
0

SALT LAKE CITY, UTAH — A 41-year-old “proudly queer” fitness model and bodybuilder is accepting that his days spending hours in the gym are likely over, which also means his career is over.

Mr. Eric Turner told his 1.7 million Facebook followers on April 20, “I’ll be fully vaccinated in mid-May, and ready to shoot.” That implies that he’d already received one mRNA injection and was awaiting the second one. 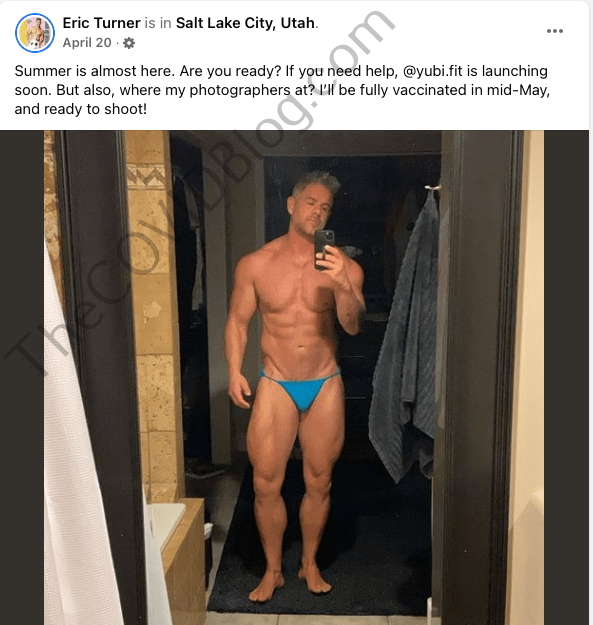 It started on July 15 when Mr. Turner regurgitated mainstream media propaganda about the so-called “Delta variant.” He ended the tweet with an all-caps “GET  VACCINATED.”

Mr. Turner then blamed the so-called variants on non-vaccinated people and advocated for wearing masks in perpetuity as a result.

A September 7 tweet implied that Ivermectin causes low sperm counts. He also hoped that the Nobel Prize-winning drug would “weed out an entire branch of idiots from our evolution tree.” At least one Twitter user called him out for wishing death upon those who disagree with him. 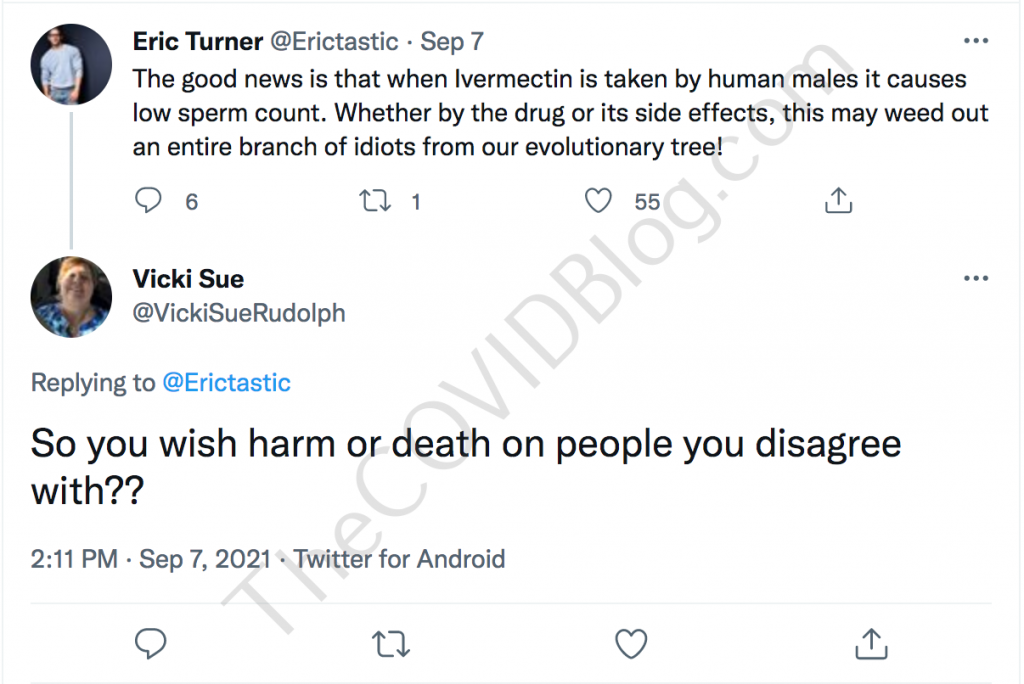 Mr. Turner, on September 8, equated children not wearing masks in schools to children being gunned down by shooters in schools.

Another disturbing tweet on September 10 equated abortion with children not wearing masks in schools.

Mr. Turner posted yet another nude photo of himself on November 8 at 7:39 a.m. with the caption, “I’d rather wear a barrel than conservative apparel.” Eight hours later, he posted a photo of himself in a hospital bed. He thought the problem was some sort of temporomandibular joint disorder (TMD) because he felt pain in his jaw bone. But doctors told him he had a heart attack. Mr. Turner said doctors were “baffled” because he believes his heart is very healthy. 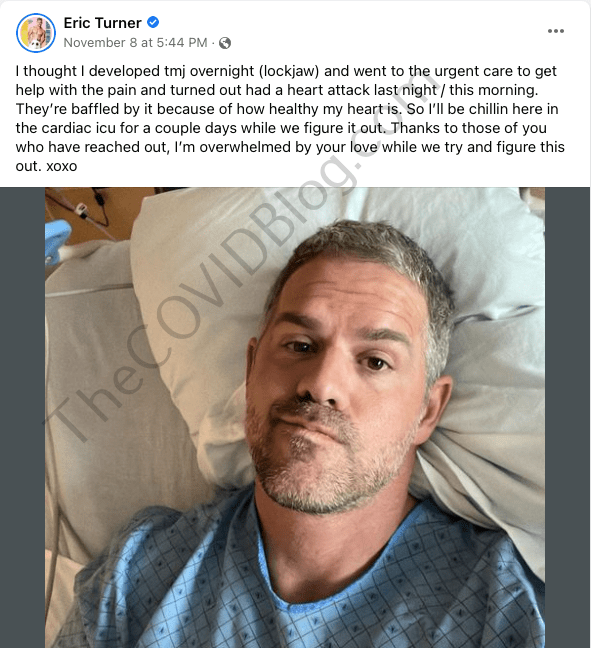 Four days later, on November 12, Mr. Turner posted an update. He conceded that his life is “changed forever” after doctors diagnosed him with a spontaneous coronary artery dissection. That means the thin layers making up the arterial walls of the heart separated, causing blood to seep between said layers. Blood accumulates between the layers, causing clot-like blockages.

The condition mostly affects women, with 98% of cases in one study being females. It typically occurred while giving birth or during pregnancy, which may link the condition to hormonal changes, according to the Cleveland Clinic. Extreme exercise and cocaine use are also risk factors.

Doctors have no idea how to treat the condition because it’s so rare. Mr. Turner enrolled in several clinical studies to try out experimental treatment in hopes of making himself better. He likely would have died within days if the jaw pain didn’t lead him to an urgent care facility.

We’ve covered at least one similar case on this blog. Mr. Bruce David Ward died on June 22, 30 days after his first Moderna mRNA injection. He also suffered an aortic dissection. Ms. Chantel Uren developed Bell’s Palsy before what appears to be a carotid artery dissection two weeks after her first Pfizer mRNA injection in late August. Interestingly her face and lips became paralyzed (Bell’s), while Mr. Turner felt pain in his jaw and face before the blood vessel dissections.

There are no further updates across all three of Mr. Turner’s social media channels as of publishing.

The cults of LGBT and “science”

First, these issues with bodybuilders are becoming clear. This blogger was a personal trainer, is an exercise advocate, and is considered “muscular” by most people. But 168 pounds and 5’9 is considered small by most people. A diet consisting of lean meats and lots of fruits and veggies is healthy and good for you, in addition to weight and cardiovascular training. “Bodybuilding,” however, is a culture of excess and supplements.

Mr. Michael Mitchell, 65, was the former “Braveheart” actor and bodybuilder who died six days after this booster shot. Mr. Jake Kazmarek was a bodybuilder and died four days after his first Moderna injection at age 28. There’s also Mr. Cody Robinson. He isn’t a “bodybuilder” per se. But he’s a large television stuntman who developed blood clots days after his Johnson & Johnson injection. There’s definitely data showing that the culture of bodybuilding plus mRNA or viral vector DNA injections don’t mix. Large men in general also seem to be more at risk of post-injection adverse effects.

This blog is truly not trying to pick on those who practice homosexual culture. But the data is becoming indisputable. The worst virtue signalers on this blog are homosexuals or played homosexuals on television.

There are now 12 stories in the Virtue Signaling category. Three of them (25%) are homosexual males (note that 11 of the 12 virtue signalers are males). Mr. Willie Garson is the Hollywood homosexual. So if you include him, one-third of virtue signalers are LGBT. The injections and LGBT are a match made in hell.

A New Hampshire teenager filed a lawsuit against his school district on November 4 after being suspended for saying there are only two genders. The school literally has a policy that says all students must accept LGBT propaganda, e.g. “men are women,” “50 genders,” etc. In other words you must live lies and subterfuges to attend public schools in New Hampshire.

Same thing with the injections. There’s indisputable, concrete evidence that these shots maim and kill. LGBT are not only receiving these injections at a 92% clip, but are defending and advocating for the shots like it’s another letter in their acronym (e.g. LGBTV for “vaccines”).

Stay vigilant and protect your friends and loved ones.

COVID Legal USA is your partner in fight mandatory vaccines and other COVID mandates. Follow us on Telegram and Twitter. Read about white pine needles and order them here.

God’s Word Is Our Weapon!